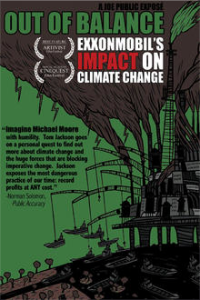 “Imagine Michael Moore with humility. Tom Jackson goes on a personal quest to find out more about climate change and the huge forces that are blocking imperative change. Jackson exposes the most dangerous practice of our time: record profits at ANY cost.”
~ Norman Solomon, Public Accuracy

“Out of Balance: ExxonMobil’s Impact on Climate Change” shows the influence that the largest company in the world has on governments, the media and citizens and what can be done about global warming. While the Earth’s climate is pushed further out of balance by increasing use of fossil fuels, ExxonMobil continues to assert undue influence around the world—making record profits while ignoring climate science for which there has been overwhelming consensus for almost twenty years.

Out of Balance does not just critique ExxonMobil, it also offers challenging, large-scale ideas for the global social changes that must take place if there’s any chance of having a livable planet for future generations.

Featuring Bill McKibben, Michael Oppenheimer, and many of the world’s most noted climate scientists and experts, “Out of Balance” aired on Link TV, including a special program featuring Van Jones, and throughout the Spanish speaking world on Telesur Internacional. The documentary focuses on ExxonMobil’s leading role in funding the skeptics of climate change. It has screened at over 50 film festivals worldwide and won several awards.

After your Purchase is processed you will be given a link to download the film, both by email and on a Purchase Receipt page on this site.

If you have any concerns or problems with the download, please let us know.

Note to iPad and iPhone users:

If you click on the Purchase Receipt download link for the movie from within your browser, it will play in your browser but not be saved to your device.

There are apps available for downloading directly to your device and playing at a later time, such as iDownloader.
Joe Public Films LLC does not assume any responsibility for the use of such apps by our customers.